Some of the important and popular Buddhist pilgrimage sites in Tibet in terms of religious, spiritual and tourism importance are as follows.

Drepung Monastery is amongst the important Buddhist pilgrimage sites in Tibet and is located in the foot of Mount Gephel. One of the main features of Drepung Monastery is that it is one of the three great Gelug University monasteries in Tibet and the other two being Ganden monastery, and Sera monastery. Since it is inhabited by more than 7000 Buddhist monks, it is the largest Buddhist monastery in Tibet. One of the main reason for its popularity is that it was inhabited by 2nd, 3rd and 4th Dalai Lama and their body are entombed here in this very monastery.

Drepung Monastery looks like a small town with the buildings made with Buddhist architectures. There are number of stupas, buildings, Nepal Tibet Buddha statues and various Buddha images all over the Drepung monastery. The teachings in Drepung Monastery are quite similar to ancient Indian Buddhist teachings. 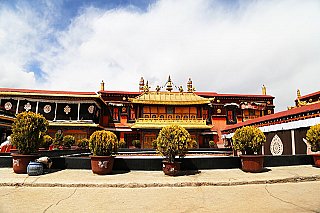 Also known as the Shrine of the Lord, Jokhang Temple can be considered as the most popular Buddhist pilgrimage sites in Tibet. Jokhang Temple is also considered as the earliest and most revered Buddhist temple in Tibet. According to history of Tibetan Buddhism, Jokhang temple was built in order to house or store all the Buddhist images, Nepali Buddha statues as well as Chinese Buddha statues brought by both Nepali and Chinese wife of Emperor Songtsen Gampo. It is said that Bhrikuti, first wife was devout Buddhist who learned Buddhism from Nepali Buddhism, and brought many Buddhist sculptures, Thangkas as well as skilled Newar craftsmen.

One of the main thing that Bhrikuti brought to Tibet from Nepal was image of Akshobhya Buddha, one of the Pancha Buddhas and was the heart of Jokhang Temple until the death of Emperor Songtsen Gampo but after his death, Chinese queen Wen Cheng changed the image of Akshobhya Buddha with Shakyamuni Buddha and from then this image known as Great Lord is considered as the heart of Jokhang Temple.