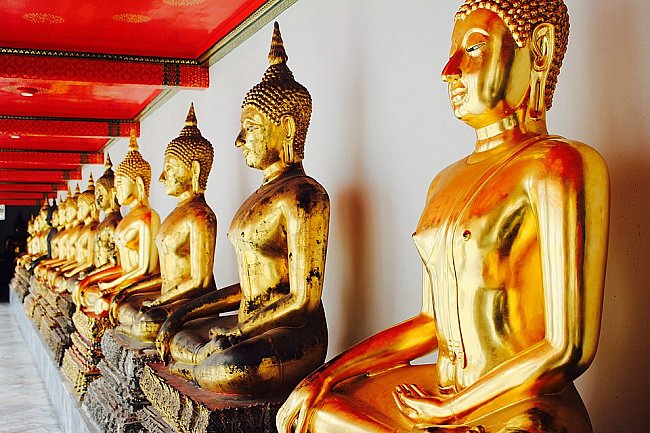 View our Buddha Statues from all around the world

Buddhism in Thailand, is largely based on the Theravada tradition of Buddhism. One of the largest Buddhist nations in the world, nearly 95% of Thailand's population follows Buddhism. Thailand is perhaps the only country in the world where the king is stipulated to be a Buddhist and the patron of the faith in Thailand. For centuries, Buddhism has played an important role in the history of the kingdom and has enriched the lives of Thai people in all their aspects. It is certainly notable that without Buddhism, Thailand would not be what it is today. Buddhism in Thailand has also successfully been integrated with the local folk beliefs as well as Chinese religions from the large Thai-Chinese population. 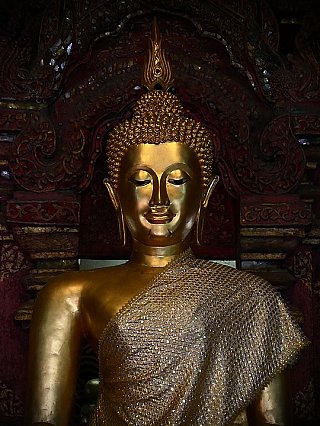 Buddhism in Thailand was introduced when one of the royal monks sent by Emperor Ashoka came to Suvarnabhumi which some identify with Thailand with other monks and sacred Buddhist texts. During the 5th to 13th centuries, the Southeast Asian region was influenced directly from India and the empires from these regions essentially followed the tradition of Mahayana Buddhism. Such was the influence of Mahayana Buddhism in the region that it spread from the Srivijaya Empire in the south to the Khmer Empire to the north and their respective Srivijaya art and Khmer art represented the rich pantheon of Bodhisattvas of Mahayana tradition. With over 900 temples built in the period of 9th to 13th centuries in Cambodia and Thailand, Mahayana Buddhism and Hindu Khmer Empire dominated much of the Southeast Asian peninsula. After the slow diminishing of Buddhism in India, the Buddhist monks from Sri Lanka slowly converted the Buddhism in Burma to Theravada tradition and then it was followed by the introduction of Theravada Buddhism in Thailand, Laos and Cambodia. Theravada tradition later dominated the previous forms of Buddhism and was made the official state religion with the establishment of the Thai Kingdom of Sukothai in the 13th century AD. Alongside the spread of the religious values, the Buddhist values and Buddhist arts like Buddha statues flourished throughout the reigns of different Thai Kings. By the 19th century, the kingdom became steadily more centralized and hierarchical in nature. Many reforms were made on the basis for the Dhammayuttika order of monks. These reforms were, all practices having no authority other than custom were to be abandoned, canonical regulations were to be followed not mechanically but in spirit, and acts intended to improve an individual's standing on the road to nirvana but having no social value were rejected.

Throughout the course of time, there have been three major forces which have influenced Buddhism in Thailand. One of the most visible which has stood out is the Theravada tradition of Buddhism which was imported from Sri Lanka. The second major influence is the Hindu beliefs from Cambodia, particularly during the Sukothai period as Hinduism played a strong role in the early institution of the Thai monarchy. And lastly the folk religion which attempts to attract the favor of local spirits known as phi is the last major influence of Thai Buddhism. Additionally, there are more minor influences of Mahayana tradition as it can be clearly seen that many features and characteristics of Thai religious architecture and many Thai Buddha statues and depiction of bodhisattvas reveal the influence of Mahayana tradition.