Among various Buddhist traditions that existed in Nepal, Newarese Buddhism is one of them and a very popular one. For long time, Kathmandu valley became the center of many Tibetan as well as Western Buddhist since Buddhism in Nepal have long history for the development of Buddhism. Newar Buddhism is quite abundance in Nepalese along with Tibetan Buddhism and Vajrayana Buddhism. Simply saying Newar Buddhism is another of Vajrayana Buddhism. Newar Buddhism is mostly practiced by Newar Ethnicities especially inside the Kathmandu valley. Some of the popular newar ethnicity who practice Newar Buddhism are ritual Buddhist priests (also known as Guruji), Bajracharya and Shakya people. Shakya ethnicity are known for their abundance knowledge of Buddhism and it is said that Shakya people perform Buddhist ritual and practices mostly for their own families while Bajracharya people perform Buddhist ritual for others. 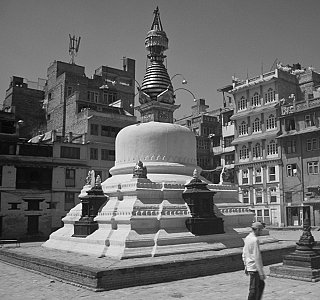 Nepal, for many Asian and Western Buddhist is the religious destination since it is believed that many ancient as well as old Buddhist sutra are available in the hands of Newar Buddhist. There exists a great number of Sanskrit Buddhist manuscripts which was discovered by Mr. Brian Hudgson in 1824.

"One great service the people of Nepal did particularly the highly civilized Newars of the Nepal valley, was the preservation of all the manuscripts of Mahayana Buddhist literature in Sanskrit. it was the contribution of Sri Lanka to have preserved for humankind the entire mass of the Pali literature of Theravada Buddhism. This was also on to Burma, Cambodia and Siam. It was similarly the great achievement of people of Nepal to have preserved the equally valuable original Sanskrit texts of Mahayana buddhism." – written by Suniti Kumar Chatterji

Not long ago, Buddhism was nearly disappeared from the face of India but it still existed to some major Buddhist events made by Dalai Lama himself. But even at such crucial time, Newar people and Buddhist kept Vajrayana Buddhism alive and even developed by organizing many Buddhist public rituals at important Buddhist pilgrimage sites. Swayambhunath temple became the center for important Buddhist events and rituals and even non-Buddhist take part in such events resulting in the better development of Buddhism in Kathmandu valley. Some of the important Buddhist events that took place in regular basis are Buddha Purnima, Samyak (where Buddha images and Nepal Tibet Buddha statues are displayed), Bunga Dyah Jatra etc.