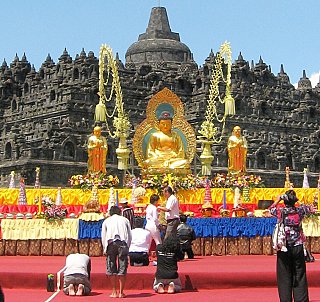 Buddha Purnima is considered as a quite important Buddhist festival since, on this specific day, Lord Buddha was born in Shakya clan of Lumbini, attained the great Nirvana in Bodh gaya under Bodhi Tree, and attained Parinirvana in Kushinagar (Death of Buddha). So many considered Buddha Purnima as The Thrice Blessed Festival in many parts of the country. Buddha purnima is considered as important Buddhist events in many Buddhist tradition i.e. Buddhism in Burma, Buddhism in Tibet, Buddhism in Thailand, Buddhist in Nepal and so on.

Being one of the major festivals in Nepal, Buddha Purnima festival is seen with much excitement as well spiritual as well as religious significance. In Kathmandu valley, Buddha Purnima is mostly focused in Swayambhunath Stupa and Bouddhanath Stupa. Swayambhunath Temple is filled many Buddhist and non-Buddhist people and the temple is decorated according to Buddhist tradition. Buddhist people show their respect with various Buddhist practice such as meditating in front of Buddha statues, praying with praying beads while non-Buddhist people show their respect by praying in front of Buddha statues, stupa. In Bouddhanath stupa, many Tibetan-Burmese Buddhist people pray and meditate.

Some special events are organized in Buddha Purnima and they are:

1. Since Buddhism is known for peace, birds are freed from cages as the symbol of peace while some donate fruits and clothes to sick.

3. Many Buddhist monks meditate and worship in front of Nepal Tibet Buddha statues and offers incense and flowers as well as candles.

4. In some occasion, Buddhist people reaffirm their faith and respects in Buddhism and started reading five principles such as not to take life, not to steal from others, to only speak truths, not to consume intoxicants or liquor, and not to commit action related with adultery.