As we study the history of origination of Stupa, we will learn that stupas were constructed with the objective to bury the sramanas in a seated position and it is often called as chaitya. It is recorded that the presence of Buddhist stupas was dated back to the late 4th century BCE in India. Some scriptures claim that stupas were built even earlier than the mentioned dates. But before the stupas were constructed with less durable materials like- woods, or other materials which is still unknown, till date.

As the Buddhism spread to other Asian countries, the construction of stupa was also spread in the name of Buddhist arts. Hence, it got the name according to the regions. It is also called chorten in Tibet while pagoda in East Asia and stupa in Southeast Asia.

As in the other regions, the constructions of the stupa was localized in the Tibet and also it was highly influenced by the ideology of Tibetan Buddhism. The stupas, in Tibet, got its form according to the major events of Buddha's life. Hence, we can see eight different kinds of Stupas in Tibet. 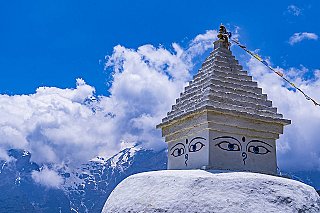 This stupa is also known as stupa of Heaped Lotuses or Birth of the Sugata Stupa. This stupa symbolizes the birth of the Gautama Buddha. It is believed that when Buddha was born, he took seven steps in each of the four cardinal directions. This general belief has been incorporated while constructing this stupa. We can observe the base is circular with four steps and is decorated with lotus-petal designs. In most of the cases, seven heaped lotus steps are constructed which symbolizes the seven steps that the Buddha took.

This stupa is also known as stupa of the conquest of Mara. This stupa symbolically represents the 35-year-old Buddha's attainment of enlightenment under the Bodhi tree in Bodh Gaya.

Stupa of Many Doors

This stupa is also known as the stupa of many gates. This stupa symbolically represents the events after the Buddha's enlightenment. These events are the teachings of the Buddha. We can observe the series of doors on each side of the steps, these doors are the representation of the Buddha's teachings: four noble truths, six paramitas, noble eightfold path, and the twelve Nidanas.

Stupa of Descent from the God Realm

The construction of this stupa symbolizes Buddha's teaching to his reincarnated mother in the Tusita Heaven. He taught the dharma as to repay his mother's kindness towards him in his childhood period. The central projection at each side containing a triple ladder or steps characterizes the stupa of descent from the god realm.

This stupa is also known as the stupa of the conquest of the Tirthikas. This stupa symbolically represents the various miracles that the Buddha performed at the age of 50 yrs. It is believed that the Buddha overpowered Maras and heretics by engaging them in intellectual arguments and performing miracles. It is recorded that this kind of stupa was first constructed by the Lichhavi king of Nepal to show respect to the event.

The objective to construct this type of stupa was to show respect to the Buddha's unique resolution of a dispute among the sangha. The first of its kind was constructed in the kingdom of Magadha where the resolution was obtained. The unique feature of this stupa is- it has four octagonal steps with equal sides.

This stupa symbolically represents the Buddha's successful prolonging of his life by three months. The unique feature that separates from other stupa is- it has only three steps, which are circular and unadorned.

This stupa symbolically represents the death of the Buddha at the age of 80 yrs. It also symbolizes his complete absorption into the highest state of mind. The unique feature of this stupa is- it is bell-shaped stupa which is usually unornamented.