The Lotus Sutra is one of the most popular and influential Mahayana Sutras. On the basis of this sutra, many schools of Buddhism have been established to date and some of them are Tiantai, Tendai, Cheontae, and Nichiren schools. It is believed that the Lotus Sutra contains the final teaching of Buddha, complete and sufficient for salvation.

Actually, the Lotus Sutra is the shortened form in English. The earliest known title for this sutra was the Saddharma Pundarika Sutra which is in Sanskrit and the immediate translation is Scripture of the Lotus Blossom of the Fine Dharma. Since the Lotus Sutra is most influential Mahayana Sutra, it is highly regarded in the Asian countries where Mahayana Buddhism has been traditionally practiced. The sutra has also been translated into several different languages. 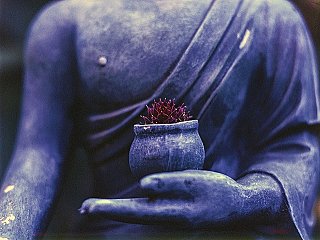 The opinion of Stephen F. Teiser and Jacqueline Stone conflict with that of Kogaku Fuse. Teiser and Stone stated that there is the consensus about the stages of composition but not about the dating of these strata.

Teachings in the Lotus Sutra

The main teachings of the Lotus Sutra can be categorized as follows:

One vehicle, many skillful means

The Lotus Sutra is known for its extensive instruction on the concept and usage of skillful means. These instructions are included in the form of parables. The sutra emphasizes that all the teachings that are encountered are actually just skillful applications of one Dharma. The Lotus Sutra sees all other teachings as subordinate to the service of the ultimate truth of the One Vehicle leading to Buddhahood. The Lotus Sutra also claims to be superior to other sutras. It also states that the complete Buddhahood is only achieved by exposure to the teachings and the skillful means.

All beings have the potential to become Buddhas

The Lotus Sutra emphasize that all the beings living in the earth have the potential to become Buddhas. This Sutra explains further that the beings have the potential to become Buddhas in their present form. They don't have to wait for another kalpas or wait for rebirth in a different physical form. Hence this Sutra provides the instructions and it is listed as having faith in, following and practicing, not slandering, and truly refuting any slander of it and its teachings.

The nature of the Buddhas

The Lotus Sutra also mentions the Buddha is an eternal entity. He achieved nirvana eons ago but he remained in this world with the objective to help teach beings the Dharma. He reveals himself as the father of all beings and spreading the loving care of a father. Actually, this sutra indicates that even after the parinirvana of the Buddha, he continued to be real and to be capable of communicating with the world.