Kumarajiva was the son of Brahmin priest, Kumarayana and Kuchan princess, Jiva also known as Jivaka. His father was from Kashmir who left the place, arrived in Kucha, and became the royal priest. In the kingdom, he met King's sister Jivaka, married her and had a son, Kumarajiva. When Kumarajiva was just seven, her mother Jivaka also joined Tsio-li nunnery. The surprising fact was that even though Kumarajiva was just seven, it is said to have already committed many texts and sutras to memory. 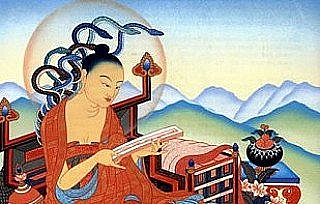 At the age of nine, his mother took him to Kashmir to study under Bandhudatta. There he also studied Dirgha Agama, Madhyama Agama, and the Ksudraka. After completing the study three years later, he returned with his mother. On the way, they met an arhat who predicted that he would introduce many people to Buddhism. He also forecasted that Kumarajiva had a bright future.

He then stayed in Kashgar for a year and ordained two sons of King Tsan-kiun. He also studied the Abhidharma Pitaka of the Sarvastivada under the Kashmirian Buddhayasa, as well as the four Vedas, five sciences, Brahmanical sacred texts, astronomy. He mainly studied Agama and Sarvastivada doctrines at this time.

At the age of 12, he again left Kashgar with his mother and then traveled to Turpan which lies in the north-eastern part of the kingdom of Kucha. Turpan was the home to more than 10,000 monks. There he met the master Suryasoma who instructed him in early Mahayana texts. Hence, Kumarajiva also converted to Mahayana Buddhism and started to study the works of Nagarjuna.

He receives more fame after he won the debate with Tirthika teacher. He was also asked to return to Kucha City by the King Po-Shui to train his daughter A-kie-ye-mo-ti who had converted into the nun. He was obliged and therefore he returned and then trained King's daughter in the Mahasannipata and Avatamsaka Sutras.

At age 20, he was ordained at the king's palace and lived in a new monastery built by King Po-Shun. He studied Pancavimsatisahasrika Prajnaparamita Sutra, one of the longer Prajnaparamita texts. It is also known that he had engaged in several debates and even had the dialogue with foreign monks. It is believed that from during this time, Jivaka had moved to Kashmir.

Kumarajiva was so much popular that his fame was spread to faraway places. Seng Jun, Chinese Buddhist Monk played an important role to spread about Kumarajiva's abilities. Learning this, Emperor Fu Jian of the Former Qin Dynasty wished to bring Kumarajiva to Qin capital of Chang'an. Therefore, General Lu Guang and his army were set off to conquer Kuch and bring Kumarajiva. But the motive was not realized because they were defeated. Later Lu Guang declared his own state and became a warlord in the late 4th century. He captured Kuch and Kumarajiva as well. The warlord imprisoned Kumarajiva for many years and in this time Kumarajiva became familiar with the Chinese language.

When Kumarajiva arrived at Chang'an, he was immediately introduced to the emperor Yao Xing, the court and the Buddhist Leaders. He was recognized as a great master from the Western regions, and immediately took up a very high position in Chinese Buddhist circles of the time. He was given the title of National Teacher. He was approached by many people to learn from his direct teachings and through his translations.

Kumarajiva while staying at Chang'an translated many sutras into Chinese with the direct request of Emperor Yao Xing. The Emperor also helped to spread the teachings of Buddha through the constructions of many Buddhist pagodas and temples housing Buddha statues. It is described that due to the influence of Kumarajiva and Yao Xing, 90 percent of the population became Buddhists.