Kalama Sutra got its name after the clan Kalama, to whom the Buddha gave the discourse about the true wisdom and how to analyze the teachings whether it is true or not. Kalama Sutra is included in the Anguttara Nikaya of Tipitaka. This sutra is often cited by the followers of Theravada and Mahayana Buddhism.

The Kalama Sutra is used for advocating true wisdom. This is generally done with the help of sound logical reasoning arguments for the inquiries, like the discipline of seeking the truth, wisdom and knowledge are religious or not, that are generated in the practice. Hence, the Kalama Sutra is opposite of blind faith, dogmatism and superstitious belief. 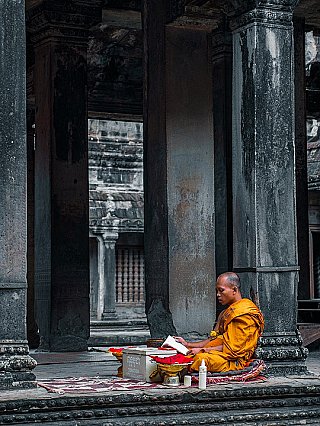 At the start of the Sutra, it is mentioned that once the Buddha had passed through the village of Kesaputta. When he reached the village, he was welcomed by the inhabitants, also known as Kalamas. The Kalamas were in big confusions, therefore, they ask the Buddha for help. They asked that many wandering holy men passed through their village. During their resting period, they usually preach their own discourse and they complain/ criticize about the others. Therefore the Kalama were confused about whom to follow? In reply, the Buddha gives a sermon that serves as an entry point to the Dhamma, the Buddhist teachings for an entry point for those unconvinced by mere spectacular revelation.

After listening to the queries of Kalama Sutra, the Buddha then proceeds to the lists of the criteria. These criteria help the sensible people to decide to accept as true among the teachings that he stumbles upon. The Buddha focuses that the people should not blindly believe on any of the religious teachings even though they claimed to be true or they show the application of various methods or techniques. When there is confusion regarding the teaching, the Buddha focuses that we should focus on the direct knowledge related to that query. He also advises that the words of the wise should be heeded and taken into account. In this sutra, he explained that everyone should be active, in a sense of constant questioning and personal testing of the teachings to determine whether the discourse is true or not.

Mainly, the Kalama Sutra states that

Further, the Buddha also mentions the ten specific sources whose knowledge should not be immediately viewed as truthful. We should take further investigation to avoid any misbeliefs in this regards. These sources are:

Instead, the Buddha says that only when one, personally, knows that a certain knowledge is true then only accept it as truth and practice it, otherwise don't just believe it. We should learn more about that knowledge and analyze it whether it's true or not.

Regarding these four assurances, Soma Thera, Theravada Buddhist Monk explains that the four assurances point out the extent to which the Buddha permits suspense of judgment in matters beyond normal cognition. The assurances also explain that one doesn't necessarily depend on the belief in rebirth or retribution for a virtuous life, but simply acquire mental well-being overcoming of greed, hate, and delusion.