Jizang, a Persian-Chinese Buddhist monk, and scholar are also known as Jiaxiang or Master Jiaxiang since he was popularized and recognized while he was at the Jiaxing Temple. Jizang is also regarded as the founder of East Asian Madhyamaka. He was born in Jinling, present-day Nanjing. Jizang showed interest in spirituality from the initial days therefore, he became a monk at age of seven. It is recorded that he studied the three Madhyamaka treatises- The Treatise on the Middle Way, The Treatise on the Twelve Gates, and the One Hundred-Verse Treatise- which was under Falang at the Xinghuang Temple. After Falang's death, Jizang became the head monk at the Xinghuang Temple. When he reached age 42, he began to travel through China giving lectures. Finally, when he reached the Jiaxing Temple, present-day Shaoxing, Zhejiang province, he settled there. 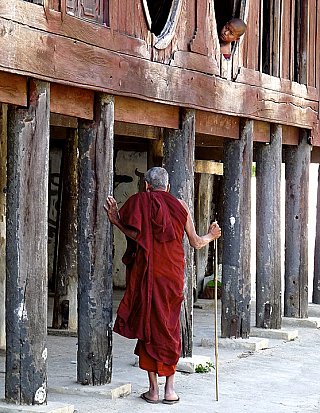 Later in the year 597 CE, Emperor Yang, Second son of Emperor Wen of the Sui Dynasty ordered to established four new temples in the Chang'an capital. Learning the fame of the Jizang, Emperor invited him to be head abbot of one of the temple, Huiri Temple present day Jingci Temple. Emperor Yang had also invited other respected figure to become the monk at other temples and one of them was Zhiyi of the Tiantai school. Jizang later again shifted to another new temple, Riyan Temple.

As the Sui Dynasty was succeeded by the Tang Dynasty in the early 7th century, Jizang gained the respect and support from the new emperor, Gaozu and henceforth, became head abbot of four temples.

The important phase of Jizang's life is the reproduction of Lotus Sutra. He reproduced Lotus Sutra with the objective to make people familiar with this sutra. It is recorded that he had made 2,000 copies of the Sutra and also his copies of some of his own commentaries. It is learned that he specialized in the commentaries on the three treatises as well as other Buddhists tradition texts.

Jizang developed a general methodology of poxie xianzheng, refuting what is misleading, revealing what is corrective, being under the Madhamaka school. He developed this methodology by following the drawbacks of asserting the truth or falsehood of certain propositions in a final or rigid sense. He also noted that the tendency of many Buddhists to become committed to becoming unattached is also itself is a commitment that should be avoided. He mentioned that anyone can avoid this commitment through engaging in the same behavior which helped to become liberated.

Jizang with the help of this two levels of discourse developed his Sizhong erdi which takes that distinction and adds meta distinctions on three more levels:

Hence, the attachment to any logic or opinion is considered detrimental and is believed to be the cause of life's suffering. To reject the misleading views on any level of discourse is the corrective and it helps to overcome destructive attachment.