Namo Buddha is an important Buddhist pilgrimage site of Nepal. It is one of the three main stupas of the Kathmandu Valley. The other two stupas are Swyambhunath stupa and Boudhanath stupa. Namo Buddha stupa is situated about 40 km to the south-east of Kathmandu city. It is believed that the stupa was built over bones and hair of Prince Semchen Chenpo which stands on the slopes of the Gandhi Malla hill. 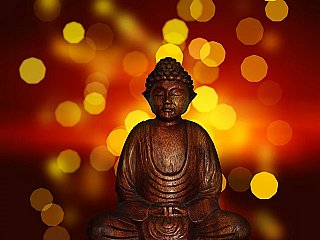 One day, the king's family along with ministers and servants left the town to spend quality time in the country. The king and queen rode upon an elephant while the sons and ministers rode horses. When they arrived at a place of thickly wooded forests, they camped there. The servants immediately unpacked everything and finally started to cook. Everyone started to do their own things, the three young princes picked up their bows and arrows and then headed for the forest.

As they walked they saw a den in the woods. They saw a tigress sleeping beside her cubs. The two elder brother pointed the arrow to tigress and her cubs but the youngest brother stopped his brothers saying that the act was evil. When Semchen Chenpo observed the tigress, he learned that the tigress just gave birth to the cubs and she was not able to move. He could not see the condition of the tigress and her cubs in that situation. He asked his brothers how to make the situation of tigress better. In reply, the brothers said that she must be fed with flesh and fresh blood.

The brothers agreed to return to the camp since they were there to enjoy not to spoil their time. But Semchen Chenpo wasn't feeling comfortable. He was thinking of the tigress while returning to the camp. On the way, he realized that that time was to show true generous to someone who is in the hard situation. Then Semchen Chenpo requested his brothers to move ahead and he will be back in a moment. He then returned back to the den.

He found out that the tigress was in very bad condition, she could not even open her mouth. Therefore the prince sharpened a splinter from a nearby tree and cut his body to draw blood which he allowed the tigress to lick. He cut his flesh to give it to the tigress. After some time, the tigress got back to her feet and the few times, she opened her jaws and stood up and devoured him.

The brothers and his mother and father waited for so long but the young prince didn't come. So they set out to search him. Lastly, they found blood, bones, nail, and bits of clothing that happens to be of Semchen Chenpo. Later they built a stupa above the remaining.

Namo Buddha is located on slightly elevated land. We can see wide panorama view of some mountains in the north. The environment is very cool during the summertime since southern winds bring coolness while in wintertime, the warm gentle sun makes the area warm.

It is believed that the palace of the king Shingta Chenpo lies in the town of Panauti, about eight km below the stupa. There is a custom of exhibiting gilded bronze Buddha statue on the fifteenth day of the fourth Tibetan month. The people gathered to perform ceremonies all day.

About three km below the stupa, there is a temple which is believed to be of Prince Semchen Chenpo's mother. The image of the mother is carved into the stone. It is also believed that the remains of the mothers are buried below the temple.

Another important area in the Namo Buddha is the cave of the tigress. The exact location of the cave is difficult to locate. However, it is certain that the cave is on the hill. Therefore, two caves have been venerated. One cave is near the monastery and another one is on a hill nearby.

Tibetan monastery- Thrangu Tashi Yangtse Monastery has been built on the eastern side of the hill by Khenchen Thrangu Rinpoche. The lamas of this monastery practice Buddhism based on the kyagu tradition. Apart from this practices, the monastery also manages, college focused on the study of Buddhist philosophy, and practice assembly focused on meditation.

Dewachen Temple or temple of Amitabha Buddha was built by Khenchen Thrangu Rinpoche as a representation of the pure realms. In this temple, the lamas perform prayer twice a month and other auspicious days of the Tibetan calendar in order to eliminate difficulties and to born in the pure land of Amitabha Buddha.

In the courtyard of Namo Buddha, we can see the statue of Buddha in Bhumisparsa posture. The Buddha is seated comfortably in the lotus seat and has halo behind his head. This statue is a good example of Nepal Tibet Buddha statue because it blends the artistic features of Tibet and as well as Nepal.

Namo Buddha stupa is the main center of attraction. Due to the relic of Buddha buried below the stupa, it is thought to be the sacred Buddhist pilgrimage site. Namo Buddha is visited by Buddhist pilgrims from all over the world especially people of Tibet and Nepal.