Ksitigarbha is regarded as bodhisattva which is usually depicted as a Buddhist monk. Ksitigarbha is better known for his vows, first one is to take responsibility for the instruction of all beings in the six worlds between the death of Gautama Buddha and the rise of Maitreya Buddha, and the second one is not to achieve Buddhahood until all hells are emptied. Therefore, he is regarded as the bodhisattva of hell-beings. He is also referred as the guardian of children and patron deity of deceased children.

Legend behind the bodhisattva, Ksitigarbha 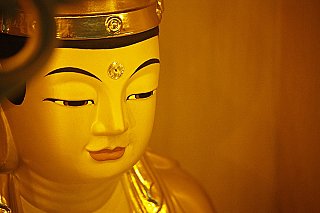 As a Brahmin Maiden

The story of Ksitigarbha was first mentioned in the Ksitigarbha Bodhisattva Purvapranidhana Sutra. This sutra is one of the most popular Mahayana sutras. In this sutra, it is mentioned that the Buddha himself states in the distant past eons, Ksitigarbha was a maiden which belongs to the Brahmin caste by the name of Sacred Girl. This maiden was deeply troubled upon the death of her mother. To save her mother from the great tortures of hell, the girl sold whatever she had and used that money to buy offerings. These offerings were then offered daily to the Buddha of her time. It was known as the Buddha of the Flower of Meditation and Enlightenment. She prayed that her mother be spared from the pains of hell and appealed to the Buddha for help.

While she was praying at the temple in front of the Buddha statue, she heard the Buddha was telling her to go home and recite the name of the Buddha. Then she went home and did as she was instructed. As she was reciting the name of the Buddha, her consciousness was transported to a Hell realm. There she met a guardian who informed her that through her prayers and offerings, her mother had accumulated much merit. She had already ascended to heaven. Listening to these words, the sacred girl was relieved and was very happy but the sight of the suffering at the hell touched her heart. She vowed to do her best to relieve the suffering of the beings in her future lives for kalpas.

As a Buddhist monk

The most popular legend of Ksitigarbha is about how bodhisattva Ksitigarbha manifested himself in China and chose his Bodhimanda to be Mt. Jiuhua, one of the four sacred mountains of China.

The former prince from Silla, Kim Gyo-gak became the monk under the Chinese name Dizang Ksitigarbha. He went to Mt. Jiuhua with the purpose to cultivate the dharma. Therefore, in a deep mountain area, he built a hut and then practice meditation.

The monk replied that he only need a piece of land that could be covered by his kasaya. The word of the monk surprised them. They were more surprised when the monk threw his kasaya in the air, and the robe expanded in size covering the entire mountain. Hence Elder Wen-Ke decided to renounce the entire mountain to the monk and became his protector.

The monk lived in Mt. Jiuhua for 75 years. Three years after his nirvana, his tomb was opened, only to reveal that the body had not decayed. The was the monk lived was with much difficulty that most people had the intuition to believe that he was indeed an incarnation of Ksitigarbha.

Bodhisattva Ksitigarbha is typically depicted with a shaved head, dressed in a monk's simple robes. He holds a cintamani in his left hand while staff by his right hand. The purpose of holding these items is to alert insects and small animals of his approach so that he will not accidentally harm them. Like any other Bodhisattva, Ksitigarbha portrayed as standing on a lotus base which symbolizes his release from rebirth. Ksitigarbha's face and head are also idealized, featuring the third eye, elongated ears.