Formally Bhaisayaguru is also called as Bhaisajya guru vaidurya prabha raja. Literally, it means king of medicine master and lapis lazuli light. In Mahayana Buddhism, Bhaisayaguru is the Buddha of healing and medicine. It is believed that Bhaisayaguru cures dukkha using the medicine of his teachings. Therefore he is commonly regarded as Medicine Buddha. 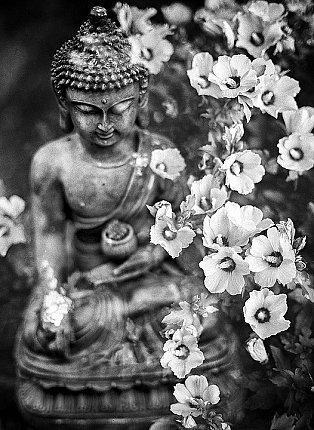 The Bhaisajyaguru or Medicine Buddha is described as a bodhisattva in the eponymous Bhaisajya guru vaidurya prabha raja sutra. This sutra is commonly called as the Medicine Buddha Sutra. When he achieved Buddhahood, he became the Buddha of the eastern pure land of Vaiduryanirbhasa. He was accompanied by two other bodhisattvas- Suryaprabha and Chandraprabha- symbolizing the light of the sun and the light of the moon respectively.

The popularity of BhaisajyaguruIt in the ancient northwest Indian kingdom of Gandhara has been mentioned in the Sanskrit version of Bhaisajya guru vaidurya prabha raja sutra. This manuscript was written in the upright Gupta script and is dated before the 7th century.

In Buddhist arts, Bhaisajyaguru is typically represented in seating posture wearing the three robes of a Buddhist monk. He holds a lapis colored jar of medicine in his left hand. His right-hand holds the stem of the Aruna fruit or Myrobalan between thumb and forefinger and rests on his right knee.

In Chinese iconography, he sometimes holds a pagoda which symbolizes the ten thousand Buddhas of the three periods of time. He is also portrayed in standing posture along with his two companions, Suryaphrabha and Chandraprabha.

Role of Bhaisajyaguru in regional Buddhism 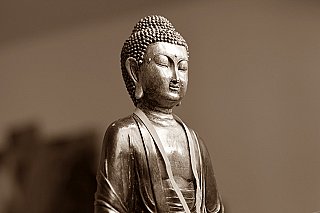 In China, Bhaisajyaguru is depicted as one of the three prominent Buddhas. The other two Buddhas are Sakyamuni and Amitabha. Bhaisajyaguru, sometimes, is also regarded as the healing attribute of Sakyamuni. It is because Sakyamuni is often called as the Medicine King in the sutras.

In Japan, Bhaisajyaguru is more commonly known as Yakushi. It has been recorded that from the beginning of the 7th century Yakushi was prayed in place of Akshobhya. Even though Yakushi's role has been taken by Ksitigarbha, Yakushi still prayed in the traditional memorial services for the dead.

The Japanese Buddhist temples mostly found in the Tendai and Shingon sects often have Yakushi as the main deity especially those around Kyoto, Nara, and the Kinki region. In these temples, Yakushi is depicted with other Twelve Heavenly Generals. These generals were actually yaksha generals who were converted through the hearing of Medicine Buddha Sutra. It believed that wherever this sutra circulates or humans prays to the Medicine Buddha and offers him, the twelve generals will protect them all. They will release or support the humans from the sufferings.

In Tibet, the people value the Medicine Buddha and also pray him with the purpose to overcome from the sufferings. The Buddhist Monks also practice Medicine Buddha's method for healing and increasing healing powers both for oneself and others. They also practice for overcoming the inner sickness of attachment, hatred, and ignorance. Therefore, it is believed that meditating as per Medicine Buddha's direction helps to decrease physical and mental illness and suffering.