After leaving the royal palace to find the truth of life through ascetic way of life, Prince Siddhartha started to experience the feelings of grief and compassion of every mankind since his experience of four Noble signs during childhood of Buddha, and decided not to rest until he find the true meanings of the life. To find the true meaning of life, death and rebirth, the ultimate truth must be attained and that is what Buddha called Nirvana i.e. realization of ultimate truths. In Buddhism, Nirvana is generally considered as the extinction of three poisons or three fires and these three poisons are passion, aversion and ignorance. If one can extinguish these three poisons from their mind, body and heart then they can attained Nirvana. 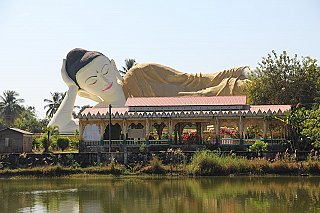 In many Buddhist traditions, such as Vajrayana Buddhism, Theravada Buddhism, Tibetan Buddhism, Newar Buddhism, and so on, Nirvana is the highest goal but the it may also differ according to the realization of a Buddhist monk such as in Mahayana Buddhism, the highest aim is Buddhahood where one must not necessarily attained the Nirvana but one need to find the resolve for the salvation of every living beings existed in this world and in this life. Many Buddhist gurus and Buddha Disciples quotes that Nirvana is the most misunderstood terms. Such as Nirvana is considered as the ultimate goal which in one sense is true, but the true meaning of Nirvana is unbinding oneself from anything that binds you with feelings, anger etc.

Realization of Nirvana by Gautama Buddha

Prince Siddhartha, who had a great luxurious childhood in the kingdom of Shakya in Lumbini, left the royal palace and struggled quite a bit before he realized the ultimate truths of life. For around 6 years, the young prince started learning every kind of religious as well as spiritual practices that most gurus and sadhus claimed to help in finding the true meaning of life. He practiced meditation and Buddhist practices that involves not eating entirely, and many other techniques. But he couldn't find any meanings and truths through such vigorous practices and decided to quit such methods and sat under the Bodhi tree in Bodh Gaya.

Though he quit, his body had become too weak and he was on the verge of collapsing and whilst a young girl while passing the Bodhi tree offer him a food and almond, and he gained quite a strength and he realized that he was almost there to find the ultimate truth. Thus he decided to meditate under the Bodhi tree and also decided not to leave the place until he realized and attained Nirvana. After several weeks he found the true meanings of life, death, and rebirth. And it is believed that a bright light appeared behind Lord Buddha head i.e. white halo. Thus he attained the ultimate truth of life and thus attaining Nirvana. Lord Buddha attaining Enlightenment is depicted in different styles such as Buddha statues, thangkas, images etc. Even though, various Buddhist tradition existed but Burmese Buddha statues, Tibetan Buddha statues, Thai Buddha statues, Nepali Buddha statues etc represents Lord Buddha attaining Nirvana in same way.

Teachings of Buddha after Nirvana

After Buddha attained Nirvana, he started teachings all the knowledge he had attained and started giving his knowledge anyone who come to him. Some of the important Buddhist teachings in Buddhism are:

Lord Buddha attaining Nirvana and his teachings have started Buddhism and in present thousand of Buddhist monks and followers of every different Buddhist styles follow the path that Gautama Buddha showed and out of respect for Lord Buddha, people also worship different Buddhist sculptures such as Stupa, Nepal Tibet Buddha statues, images, Thangkas, and Bahal etc. There are many festival that are celebrated on the day that Lord Buddha was born and one of the important festivals is Buddha Purnima. Though Buddha only said about four most important Buddhist pilgrimage sites in the world, but there are thousands of Buddhist pilgrimages sites in many countries such as China, Tibet, Nepal, India, Korea, Burma, Indonesia, Thailand etc. These Buddhist pilgrimage sites in Nepal, Tibet, Burma, and other Buddhist countries are built in order to respect Lord Buddha and his teachings based on the truth of life, death and rebirth gained through Nirvana.