Shakyamuni Buddha, the founder and creator of Buddhism is one of the few individuals who are worshipped greatly even though they are born as human beings. Lord Buddha who was born in the great palace of Shakya King of Kapilvastu, Lumbini, Nepal, later created the great religion in order to teach all human beings the knowledge that he realized through Nirvana in Bodh Gaya. The knowledge he achieved through Enlightenment was passed down from generations to generations and now there are many Buddhist traditions in the world, having their own practices and sutras as well as doctrines such as Tibetan Buddhism, Mahayana Buddhism, Vajrayana Buddhism, Theravada Buddhism and Newar Buddhism. 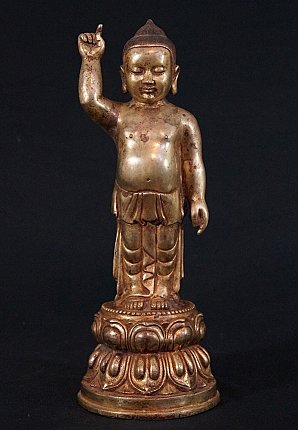 According to history of Buddha, it is believed that Queen Mayadevi dreamed about a white elephant descended from heaven entered her womb. Queen believed that the white elephant in her dreams came from the Tushita Heaven or popularly known as Pure Land of Maitreya Buddha and her child will be pure and powerful beings. Later Queen Mayadevi gave birth to Shakyamuni in a Mango Grove in the garden in Lumbini without any pain and labor. Queen Mayadevi was the wife of King Suddhodhana, the current king of Shakya kingdom in that era. Later the Shakyamuni was named Siddhartha and invited Brahmin seer in order to predict the great future of young prince Siddhartha. Most of the Brahmin and scholars predicted that Prince Siddhartha will be the greatest King in Shakya Clan but one scholar i.e. Kaundinya, one of the important Buddhist disciples, predicted that he will be either greatest king or greatest religious and spiritual leader. After hearing such prediction, the king decided that prince will departed from every pain as well as worldly natures.

Since King Suddhodhana, Emperor of Kingdom of Shakya in Lumbini, shields him from worldly matters, he was confined to the four walls of royal palace, but given everything to prince Siddhartha with pomp and luxury and providing every comforts in the world. He was taught everything from theoretical knowledge to practical knowledge such as swords training, bow training so that he could become a great ruler. From his childhood, Lord Buddha was very kind, to other living beings. In one event, when Prince Devadatta, one of the disciples of Buddha with other Shakya prince were hunting birth with bow, one bird got injured in its wing and fell down, but Siddhartha went and helped the birds and tends to its wound and later he let the bird free even though other prince were angry.

Later, for his comfort King Suddhodhana built three castles and palaces for Prince Siddhartha. When Prince Siddhartha reached the age of 16, he was married to beautiful princess Yasodhara, daughter of Shakya Chieftain. After their marriage, Rahula was born shortly. Shortly after his marriage and birth of Rahula, it is said that he went through the four events and many Buddhist monks called this events as "Four Noble Signs" which led to Prince Siddhartha choose ascetic life. These four noble signs are:

The religion that Buddha founded is one of the major religions of the world. Lord Buddha also known as Gautama Buddha is still respected by many numbers of people as a stupa, Nepal Tibet Buddha statues, thangkas, monastery, and many different Buddhist sculptures. There are different styles of Buddha Statues i.e. Nepali Buddha statues, Tibetan Buddha statues, Burmese Buddha statues etc.