As one of the four most important pilgrimage sites in the world, Bodh Gaya is the important place where Gautama Buddha attained the ultimate truth i.e. Nirvana. Bodh Gaya is also associated with other important Buddhist sculptures and sites such as Bodhi tree, Mahabodhi temple and is located in the state of India. Bodh Gaya is the symbol of starting point of Buddhism and the place where young prince Siddhartha from Lumbini found the ultimate truth by attaining Enlightenment and it is also the place where Gautama Buddha decided to teach every living beings about the knowledge that he gained through Nirvana. 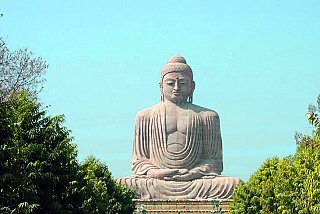 After leaving the royal palace, prince Siddhartha practiced austerities from five ascetic followers but later realized that he couldn't find any meaning and truth regarding the ultimate meaning of life, death and rebirth. Even though he realized that nothing could be gained from these austerities but these practices made him so weak and sat under the Bodhi tree of Bodh Gaya. So he realized that he would rather meditate than practice such austerities.

Later he was offered rice and milk by a local girl named Sujata who was passing the young prince. After receiving such offerings from Sujata, Lord Buddha realized that he would meditate under the Bodhi tree until he attained the Enlightenment. The offering made by Sujata can be considered the turning point in the realization of Nirvana by Gautama Buddha. Thus Bodh Gaya was considered as one of the most important Buddhist pilgrimage sites in the world and the other three being Lumbini(birth of Buddha), Sarnath(First teachings of Buddha) and Kushinagar(death of Buddha).

Another important tale also took place in Bodh Gaya. When Lord Buddha attained Nirvana, Mara who is a demon of illusion, tried to distract Lord Buddha so that he couldn't attained the ultimate truths of life, death and rebirth. Then Lord Buddha touch the earth and call the witness i.e. sometimes it is said that the witness was Goddess earth where as sometimes it is said that the witness were thousands lifetimes of virtues which led him to attained such truth. This poses is defined as Earth touching Mudra and there are different styles of Buddha statues in Buddhist sculptures. Thus when the witness was called upon, Lord Buddha broke through the illusion laid by Mara demon, and Mara demon along with his demon army fled from Gautama Buddha.

Bodh Gaya was the turning point in the life of Lord Buddha as well as inspiration to many Buddhist traditions in the world. In 2002, Mahabodhi temple of Bodh Gaya was announced UNESCO World Heritage Site. Aside from Bodh Gaya, Buddhist pilgrimage sites of other Buddhist countries are quite popular in western cultures as well as all the Buddhist devout and most of them are announced World Heritage Sites By UNESCO such as Potala Palace, Sukothai, Bouddhanath Stupa, Bagan etc. Potala Palace is one of the most popular Buddhist pilgrimage sites besides Bodh Gaya, since it is the residence of Dalai Lama.